Posted on Mar 15, 2014 by Robyn0312
So I have got my travel mojo back!
Today after a great big sleep I went for another explore and definitely felt better this time around. In hindsight I will regret sleeping in so late though! Dam jet-lag!
I still have numb hands and tingly feet from the altitude tablets, but the headache is gone. I’m going to stop taking the Diamox to see if I feel better.
My room is up on the top floor and I’ve been getting breathless making the climb. It’s very odd! Although I had to move this morning to a shared room with one of my tour mates, Courtney.
I went around the old town again and even got my snazzy new camera out! It’s so clever it connects your photos to your phone or iPad via Wi-Fi so no need for cables – very advanced for the likes of me!
So here are some pictures of my exploring today, they are mainly the exteriors of buildings as it’s disrespectful to take photos inside (although this doesn’t stop some rude tourists!). Also the weather is very overcast so they’ve not come out brilliantly. 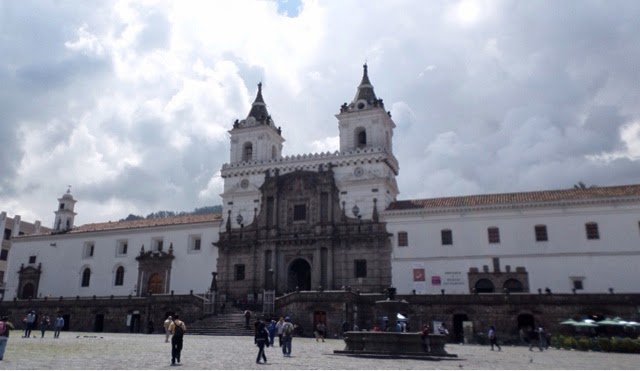 Iglesia y Convento de San Francisco, the interior of the church is beautiful. I stayed here a little while listening to a man playing the panpipes outside. The panpipes always make me think of my mum, as she had a bizarre thing for them and I remember once even said she wanted to learn to play them, thank goodness that never took hold! 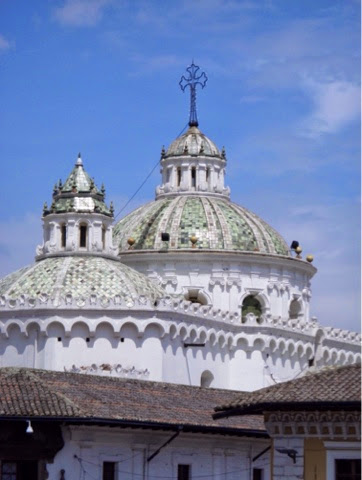 A nice looking roof… I think somewhere nearby the Campania. 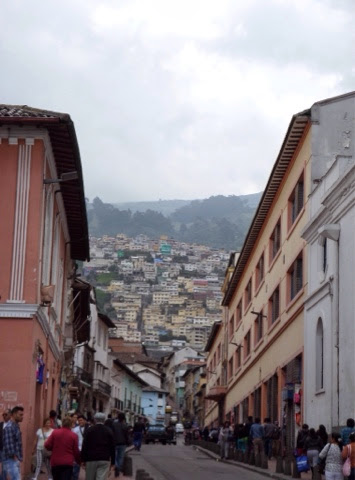 View up to one of the suburbs built on the side of the volcano, Guagua Pinchincha (active). 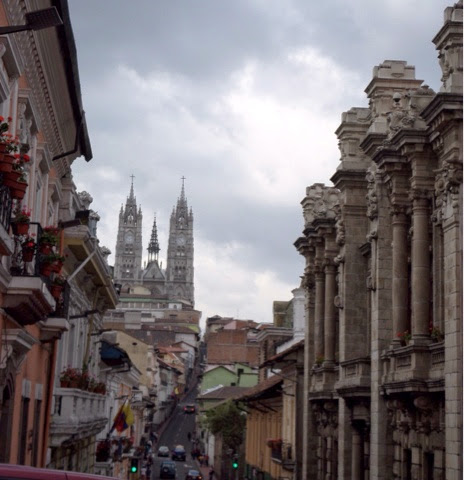 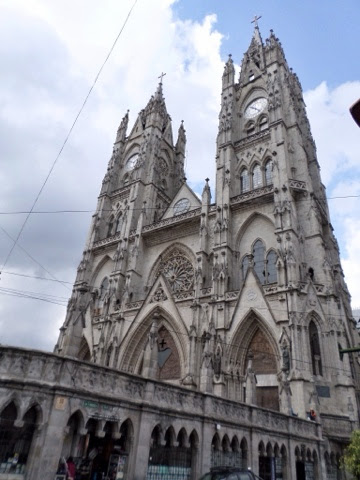 I ventured up to the centre for contemporary arts, which had nice views of the city, but didn’t contain much art. There was one exhibit which essentially looked like a guy had gotten obsessed with Francis Bacon and then gone a bit mad with x-rays, granny doilies and charcoal… Very odd… The only other “art” consisted of lots of young couples making out everywhere – so I was not very welcome. All in all an odd and slightly bemusing experience! 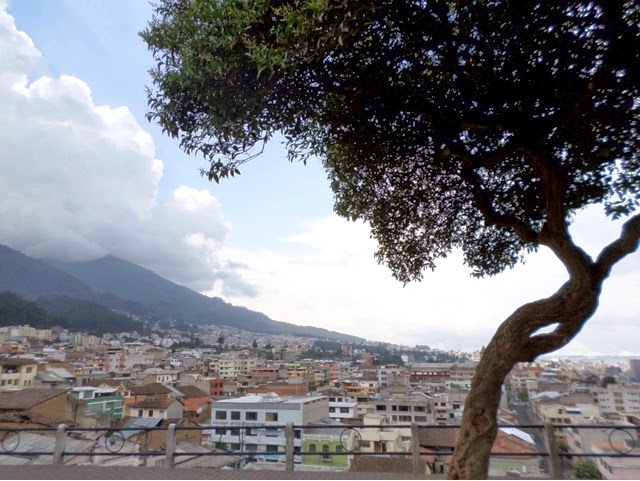 View from the centre of contemporary art (with no art).

I wondered back via a small market in the Parque El Ejido, where there is a stone archway Arco De El Ejido. It’s a nice spot with lots of families playing and I hung out reading in the park for a while, but found that there too people are far more open than back home. Couples were being pretty full on all over the place and no it wasn’t at a dodgy time of day, this was 4pm! Maybe I’m just a prude!
The tour group met up for our induction this evening and the initial feeling is that we’re a bit of a mixed bag but that all in all we should get on. There’s 4 of us going all the way through to Rio together, a couple leaving at Santiago and the rest finish in La Paz.
The group are (here’s the trial remembering names!):
Our guide through Ecuador is Diego.
Going the full route:
1. Me 🙂
2. Courtney, 27, from Melbourne, just quit her job in administration to travel before training to be a veterinary nurse. Has already been to the Galapagos Islands and heads to Mexico after this tour.
3. Karen, 29, from UK and Hong Kong, has just left her job as an architect in London to move back to Hong Kong for a new job.
4. David, unknown age (guessing mid 40’s), from Melbourne, don’t know anything about him yet as he arrived late, but he has joined us from Colombia and is staying in Brazil to see all the World Cup matches afterwards.
Leaving at Santiago:
5 & 6. Ruth & Jeff estimated 50’s, from Brisbane, already travelled around Argentina and Brazil.
Leaving in La Paz:
7 & 8. Jo and Sue, 50’s, from Brisbane, or rather Ipswich, work in education.
9. Aziza, or Zi for short, 23, from Sydney, travelling after graduating. Already travelled around Brazil, Uruguay and Argentina.
10. Tamara, 24, from Sydney but now lives on the GC, works in marketing.
We have another 2 mystery people who are arriving in the night… So we shall what we get!
I had really wanted to visit Cotopaxi national park and hike up the volcano tomorrow, but was warned against it as they reckon I would get sick and not make it, due to already having symptoms from the altitude. No one else wanted to do that so I guess it’s for the best.
Instead we’re hiring a bus as a group and going to the largest indigenous markets in Ecuador, visiting some waterfalls and lakes and also stopping at the equator – exciting!
Hopefully some good photo opportunities!