Posted on Mar 20, 2014 by Robyn0312
So today I learnt lots of fun facts… Which will be laced throughout the post… Can you contain your excitement kids!

I was super tired this morning, the combination of sleeping in yesterday (naughty and my own fault I know) followed by raucous music outside all night long, which actually made the windows shake at one point and a wonderful 3 tone car alarm which went off every 30 minutes for 7 hours… But I was not grumpy at all, ready for a fun day of exploring!

The journey started with a 2 1/2 hour drive from Quito to The Equator site. There are actually several sites where you can stop at the equator and we went to the one on the way out of town towards Otavalo. We drove partly along the Pan American highway, which is the longest highway in the world running from the tip of Argentine in the South up through North America. It only breaks at Panama, where the Americans prevented construction of the road for fear of sabotage of the canal when it was being built. You have to take a boat to connect the two parts of the highway.

Stopping at the equator was a definite bucket list moment! I was a typical tourist and had my picture taken stood across the line, with one foot in the Southern Hemisphere and one foot in the northern hemisphere.

We saw 2 equator locations, the first was built by the Spanish over 30 years ago, but it turned out to be in the wrong position. It’s now quite run down, but a lot of people still stop there. It really only consists of a concrete globe structure at the side of the road.

The newer location was constructed in 2005 and shows the lines associated with the June 21 equinox and the solstice lines. It’s very nice with great views of the mountains.

The pre-Incas identified the location of the equator, possible in Ecuador due to the good visibility of the stars of both hemispheres and the ability to triangulate using the mountains. In fact multiple archaeological sites have been identified along the lines which connect the solstice and equator locations. It is amazing the level of sophistication that these early civilisations had.

It also turns out that North is actually an old Sanskrit word meaning left… And we’ve been viewing our maps the wrong way around all this time… Get with the times people! 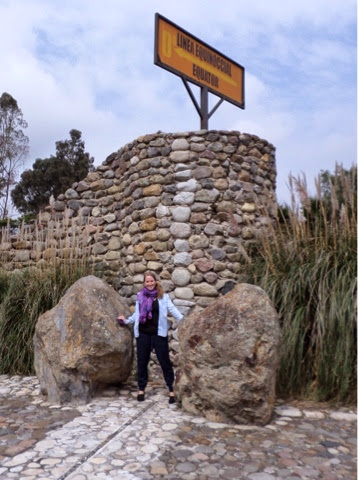 One foot in each hemisphere!

The views along the drive to Otavalo were great, steep sided knife edge mountains, with lots of evidence of recent slope failures (you just can’t turn it off it’s ridiculous!).

Agriculture is the main industry of the area. Bananas are one of Ecuador’s largest exports and roses are its third biggest export, with most of their flowers going to the USA and Europe. You could see the large fabric tunnels covering the roses extending for miles along the valleys. The climate is just right for growing the flowers all year around too and a rose in Quito costs on average 25 cents! You could also see people growing corn in fields and any spare areas between houses.

The fields extend up to approximately 3800m in elevation. The snow line is at 5000m. Between the two no crops are grown. A natural plant (with a name I can’t remember, which sounds lightly like Pomona) grows above 3800m and it traps the water in the air, this then percolates down into the ground and supports crop growth further down the mountainsides.

You can also see plants growing all over the hillsides which look like Aloe Vera, but are actually another closely related species. The centre of the plant is used to brew local alcohol. The leaves of the plant are boiled down for the fibres and then made into rope. The local people also harvest reeds and weave them into mats. These are then used as internal building partitions and also used as sleeping mats, laid down 3 thick on the floor. 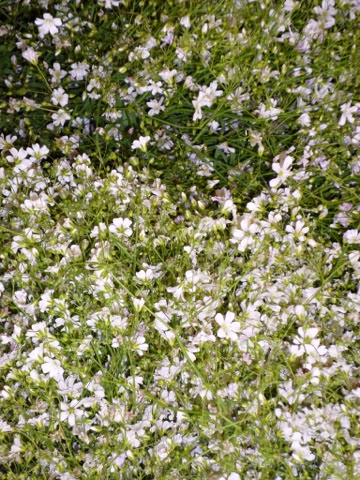 Otavalo has a population of 41,000 people, of which 55% are considered, or consider themselves to be indigenous. This is large compared to the average indigenous population across the rest of Ecuador which is only 20%. In Otavalo it is also still traditional for both the men and women to wear their hair long and you see the people with their long bound ponytails, apparently they aren’t supposed to wear their hair down, especially the women.

There are several markets in Otavalo and Saturday is the main market day.

We first stopped at the animal market. People trade animals here, as food and also as pets. We saw pigs, chickens, cats and dogs. We also saw guinea pigs, some tiny and some enormous. They also had fighting cocks, which is still a popular sport here. Apparently they spray rum on the arsehole of the cock to make them angry before they fight – well I think that would make most people angry! 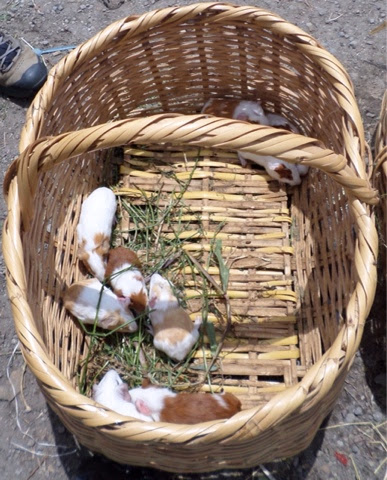 A basket of baby guinea pigs.

Next we walked around the fruit and vegetable market. This was my favourite stop of the day. We tried some local fruits, some nice, many very sour though! I liked the custard apples best of all, really ugly looking but delicious.

There were lots of stalls selling all kinds of foods, including grains, spices and even enormous slabs of chocolate, which were 100% cocoa, or so they claimed. It did taste very strong. When the shop keeper told us that the big slab, see photo below, only cost $2 the girl next to me actually shouted out “No Way!” (which someone in particular should find especially amusing 🙂 ). The stalls selling lunches looked amazing, with lots of roast suckling pigs served with corn and great looking roast chicken and stews. 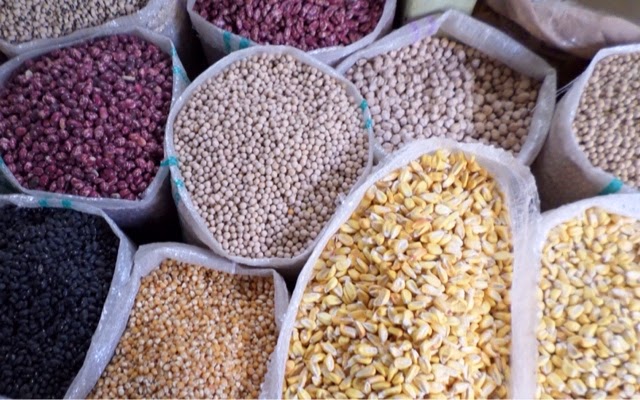 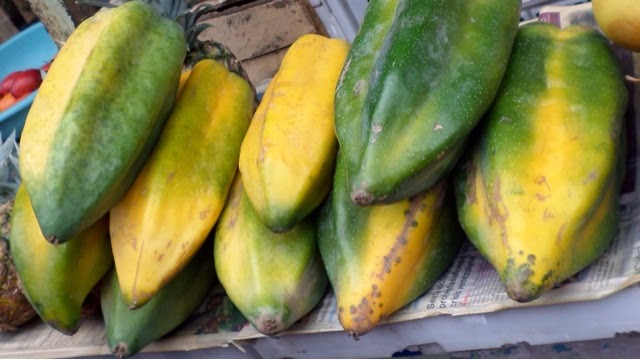 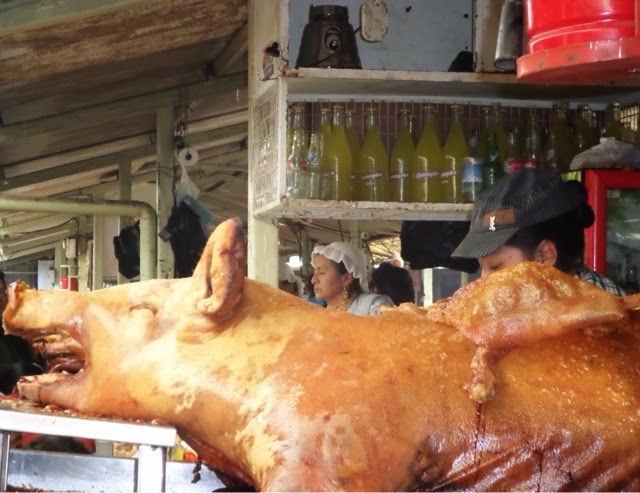 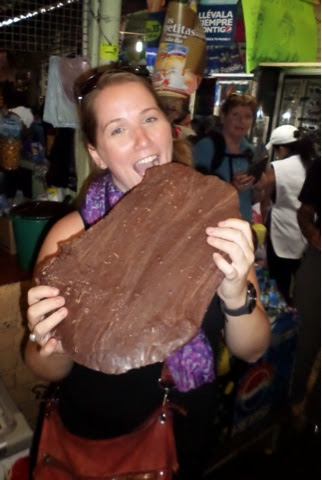 After that we wandered around the large indigenous craft market for a while. This is the largest indigenous market in Ecuador and it certainly had pretty much anything you were looking for. There were lots of paintings, jewellery, blankets etc. and lots of them very beautiful and very, very cheap. I was very restrained and didn’t buy anything though, as I will be on the road for a long time and am trying to travel as light as possible. I really liked the stalls with all the different coloured yarns, such Brit colours all piled up together looked amazing. 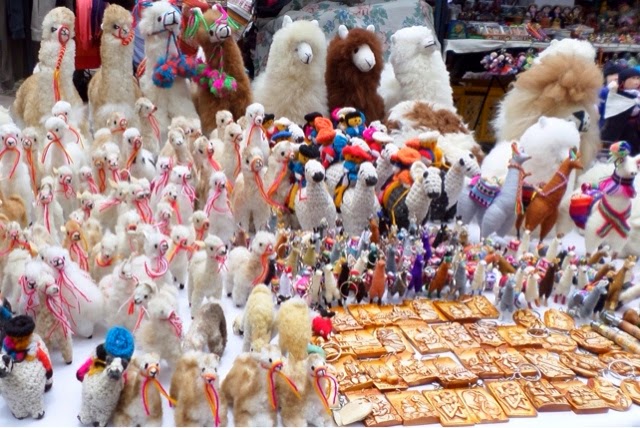 Because a girl can never have too many llamas! 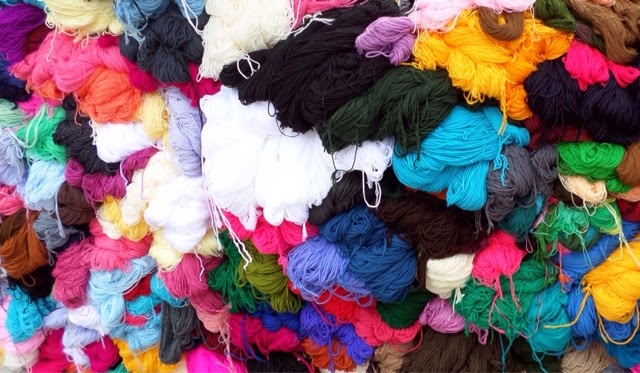 We had lunch at a local restaurant of cows hoof soup followed by tongue, which was OK, but a bit tough.

On the drive back I was able to do some geo-geeking. The roads are all newly constructed and the cuttings along the sides of them are huge. They have brilliant, nearly fresh rock exposures, lots of which show the lava flows and ash flows very clearly. You can see that the material weathers very quickly and they are covering the upper slopes with geofabric and then shotcreting the lower 10m or so. They are nearly vertically sided with huge benches too, crazy compared to the slopes back home.

It is a bit of a shame that so many of the hillsides are just going to end up covered in shotcrete though! It seems like a great opportunity for local geologists to get a good picture of the geology of the area. In the lower areas you can see that the cuttings consist of thick colluvial, or landslide deposits and it’s interesting the see the difference driving in and out of the valleys. 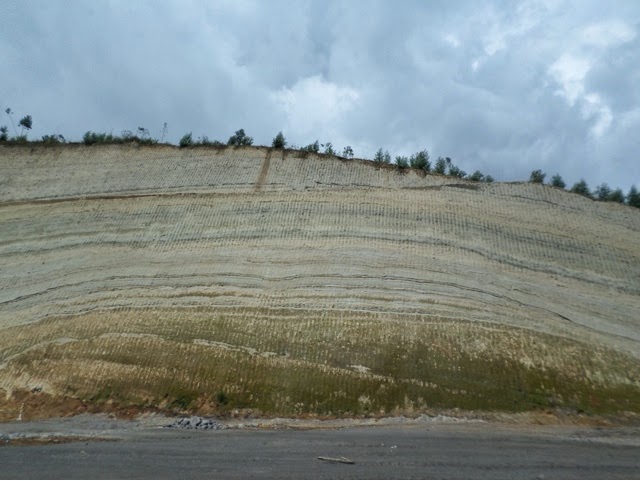 We also stopped at a view point at Lago San Pablo with views of the volcano and the lake. There was a really cute old lady sat outside her house looking at the view and it was funny trying to take her picture, as she thought she was in the way of the view and my Spanish is too rubbish to explain/ask permission properly. 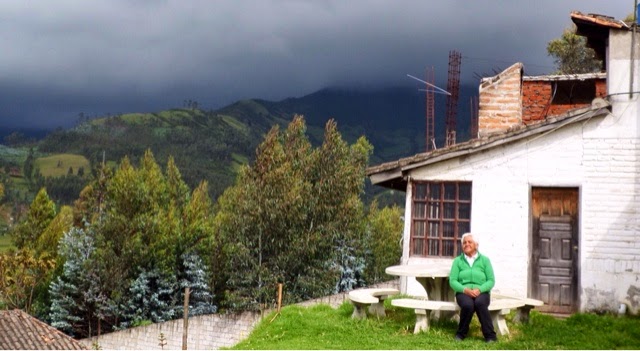 Back in town the mist had cleared a bit and you could clearly see the 2 volcanoes of Quito, called Guagua Pichincha (active) and Rucu Pichincha (dormant). The volcanoes are to the west of the city so you always know which direction your pointing in once you see them.

In the evening I tried the local specialty, potato soup, which was awesome, but very filling. I then got an early night to try and actually get some sleep and get ready to head into the amazon! Very excited!