Posted on Mar 28, 2014 by Robyn0312
We arrived in Chiclayo, which we have been told is both the 4th and 5th biggest town in Peru, with a population of over 500k, but I don’t know which tour guide is correct and frankly am not bothering to remotely fact check anything… So there you go.
After breakfast we met our day guide Juan and went to the museum of The Tombs of the Lords of Sipan
The Lords of Sipan were part of the Mochica culture. The Mochicas lived along a 600km stretch of the Peruvian coastline, between approximately 1BC to 5AD, before they were conquered by the Incas.
Their territory was split between 9 domains. Each domain was at war with one another over territory and so it was not a peaceful culture, even though they worshipped the same gods.
The Mochica people paid taxes through a system of construction. Each person or family had a different insignia which was stamped into Adobe bricks. These bricks were then used to construct large elevated pyramid-like structures, however there are no stairs, instead a system of ramps was used to connect different levels of the pyramid. Each individual would construct a vertical stack using their adobe bricks and in this way pay their taxes. These adobe stacks were built up next to one another and the pyramids, or Huacas, are essentially just a large collection of these with a mud surface veneer, like a plaster. The outer surfaces were often decorated with cravings or paintings.
Remains discovered from one of these pyramids, near Sipan, are on display at the museum. We had an extremely informative tour and I won’t include that much of the information here as it would on go on forever and also because you can look it up on the interweb if you are so inclined.
The museum itself was designed by a French architect who decided that the building should reflect the Mochica style, as shown below.
Three tombs have been found and excavated so far, another earlier tomb was discovered by grave robbers and so there are no artefacts from that one in the museum. 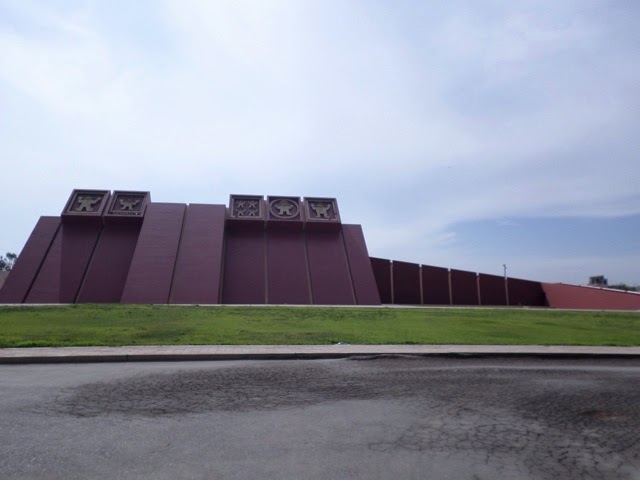 The pyramids were build up vertically in layers of around 1-1.5m vertical thickness and each successive governor or leader would build a new level and then live in a house on the flat topped section.

The foundations of these large structures is said to be around 9m deep and is in filled with columns of Adobe bricks, in the same way as the main body of the structure. These are solid, in filled structures, not hollow. The only hollow spaces are the tombs.
General residents of the area were buried in the low lands. Higher born people were wrapped in bamboo coffins and buried in brick lined graves. Royalty and priests were buried in brick lined tombs within the pyramid, along with lots of artefacts. The coffins of the royal persons were constructed out of wood.
The museum displays the findings from three tombs. Two were located on the same level and are thought to have been one of the lords of Sipan and his priest. The third was located two layers down and is older lord of Sipan, the grandfather of the man found in the upper layer.
The exhibition includes lots of silver and gold artefacts, along with a large collection of pottery.
When silver and gold is found on the same artefacts, half and half, this is apparently an indication of religious significance.
Most of the items are also hollow with beads or have overlapped plates. The idea behind this was that they would make noise as The Lord or priest walked along. The people actually believed that their leader was a god. They used to wear metal plates which attached to a pierced hole in the septum of the nose. They are concave and look a bit like weird comedy fake moustaches. The shape allowed The Lord to amplify his voice when speaking to large groups and this ability further made people believe he was a god.
They used to wear amazing big earrings, these are all circular and made of gold and turquoise, with different designs for separate occasions. A thick hollow stem was fixed into the earlobe and then the front disc could be interchanged. They were very beautiful but looked very heavy and not comfortable to wear at all.
They also have these wide overlapping plates you would wear on your backside, all I could think was that they would be super annoying whenever you wanted to sit down!
The remains contain a lot of jewellery, headdresses and amazing beaded necklaces. The necklaces are made of tiny shell beads on cotton thread. The beads themselves are made from conch and solypuna (unsure of spelling?) shells.
These two shell types have special significance and identify that the owner was wealthy or royal. The shells are species from Ecuador and these creatures indicated the start of the wet season, they were more variable to the people than silver and gold and therefore the main status symbol.
Priests are shown with a cup in their right hand for drinking either Chi Cha, blood or cactus tea, taken to hallucinate for religious reasons.
The gods worshipped by the Mochica people are all combinations of men and animals, such as crab-man, iguana-man and the main god the puma-man. 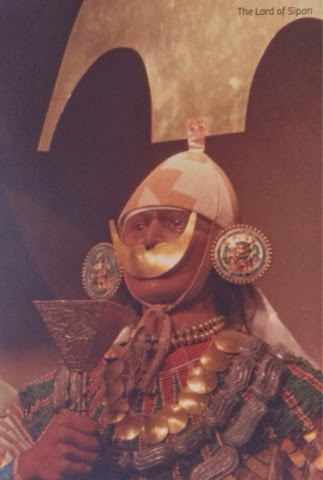 Reproduction of The Lord of Sipan in all his finery. The amount of metal jewellery he wore would have weighed around 5kg

When high born people were buried their bodies were orientated so that their head pointed towards the South. They were also frequently buried with other people. Several people were poisoned and then buried in the tomb. In the larger tomb of the younger lord there are actually eight bodies including the Lord, two concubines, an eight year old boy and warriors. The warrior’s feet were cut off so that he would act as the protector of the tomb for all time. It was also common practice to amputate hands and feet as offerings to the gods.
It was amazing to see the evidence of such early sophisticated cultures, with such well-defined cultural rituals. The quality of the detailing was amazing and it was very interesting as I did not know anything about pre-Incan cultures at all 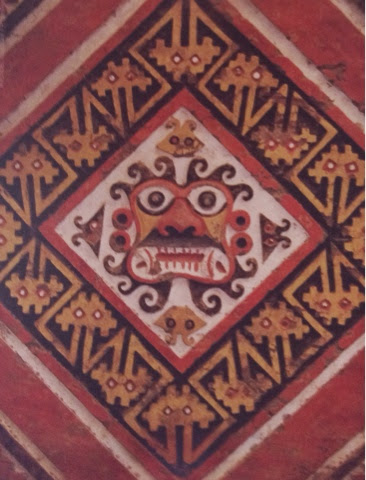 After a traditional lunch of Lomo Saltano, beef with onions and rice, we headed round the witches market. This was quite interesting, there were lots of stands selling dried plants and grains. Others sold boxes of prepared drugs for pretty much everything you can think of, although mainly relating to digestion and sex. 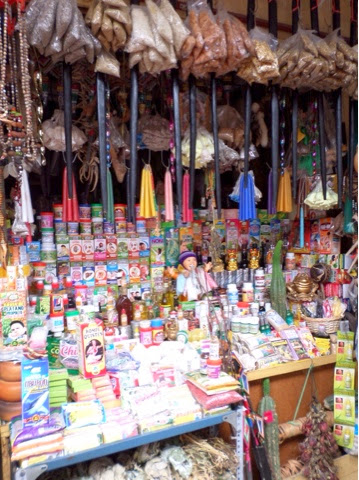 At one stall we were offered a special potion for ladies, which apparently will prevent your man from ever leaving you. Frankly if you think you need a potion for this you have bigger problems I reckon. 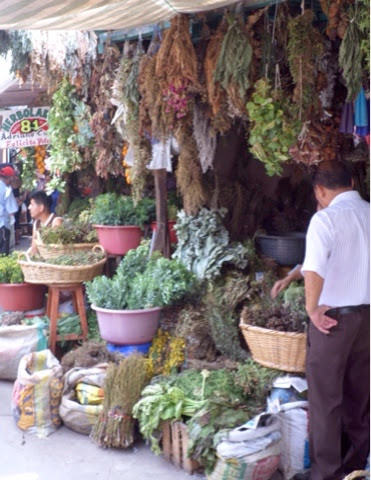 We also saw lots of the San Lucas cactus, which is either smoked or drunk in a tea as an hallucinogenic drug. Apparently it was traditionally used by priests to get closer to god and is now mainly associated with traditional witch doctors, or shamans. I reckon that curious tourists probably make up a significant portion of their consumer market though. 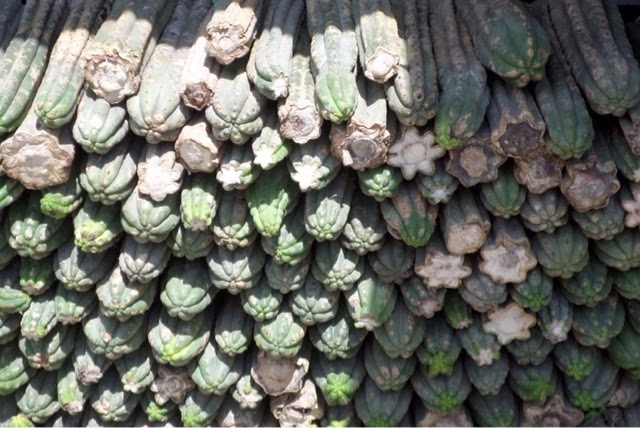 We bought the most enormous pomegranate from a man carting them around in a big wheelbarrow. It was huge, about 5 times bigger than the ones at home and so juicy and fresh. It took four of us to eat it all. They looked beautiful in all together in the wheelbarrow too. 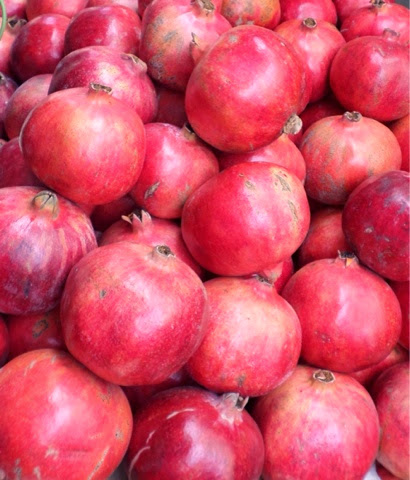 We then hopped on a VIP bus to Trujillo. Michelle and I got to sit at the front, upstairs. It was a bit of an eye opening experience… At one point we were overtaking a truck and three oncoming vehicles were forced off the road. I think I prefer to sit further back and to just not know… 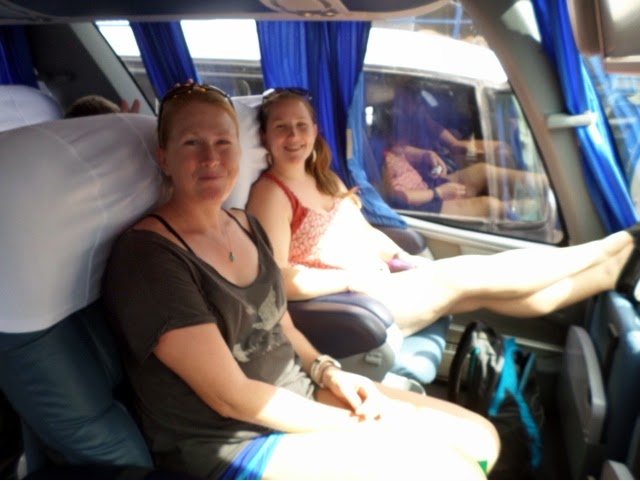 That night we went for dinner in the main town and also saw the town square which is lovely. A local performer was making fun of us as we can’t speak Spanish, but it seemed good natured and was quite amusing :-).
What was less amusing was all the sleazy men, there were lots of groping attempts and people saying things just as you were walking around, very slimy.
The group went on a visit the next day to the largest fully excavated mud structure, called a Huaca. It was quite interesting. The construction is similar to the Mochica style, with ramps, but I wasn’t sure of its age. The walls are trapezoid mud walls with carvings of warriors and rainbow serpents up the sides. It’s quite cool but you can see the damage being down by the exposure to the rain and you wonder if it was worth uncovering it for it all to be lost.
The view from the top of the Huaca across the city made me feel a bit like I could have been in the middle east or Asia. It strikes me as interesting that such similar construction methods and building styles seem so common worldwide.
The guide also demonstrated how to blow a conch shell properly, it’s so loud, it’s like a truck!
Messengers used to blow conch shells to indicate their location and to notify the next message point to have another runner ready to carry the message forwards.
The Pan Americana runs alongside the Huaca too and in fact this was part of the ancient Inca highway, the Inca Trail.
The Huacas were actually built at regularly measured intervals, approximately 5km apart and you can actually see other unexcavated Huacas across the city.
The Mochica people actually used their knowledge of the local geomorphology when choosing the location of their structures. In this particular location a nearby mountain diverts flood flow from the main river in a path to either side, away from the Huaca. In fact it seems that the Mochica people didn’t built next to rivers, as is fairly common with ancient civilisations. They actually built away from them and then constructed irrigation channels to provide adequate water supply and to support agriculture. I did wonder if the elevated structures of the buildings of powerful people I.e. the Huacas was partly related to flood resilience. 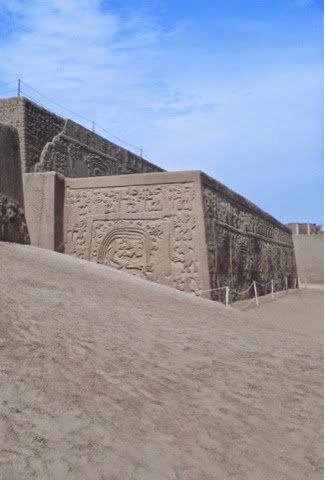 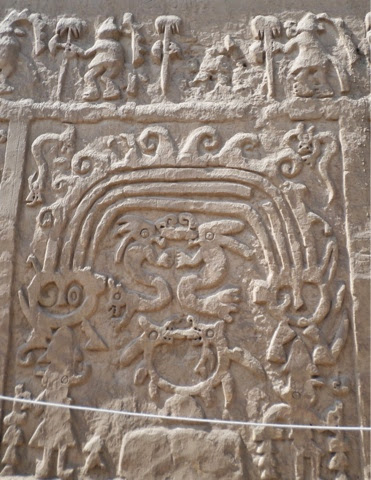 Carvings in the mud plasterwork. 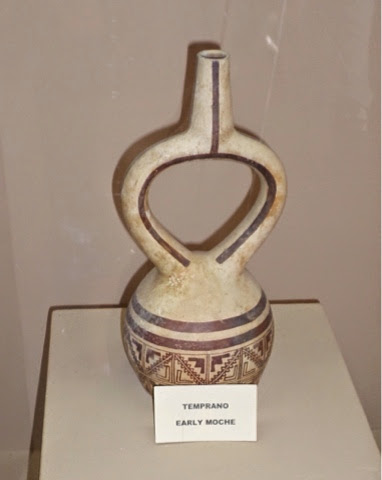 We then went to see the Chan Chan mud city, a vast city walled citadel, with carvings of animals and patterns along the walls. A lot of this was reconstructed though so it’s hard to know what was original and what has been redone. What was interesting was that there is no evidence of the use of doors. 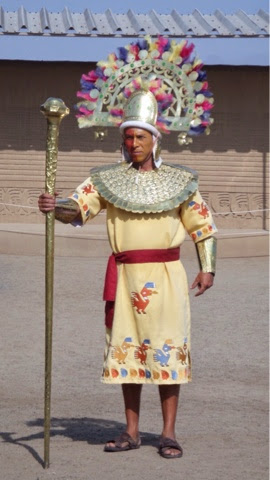 The Lord of Chan Chan 🙂 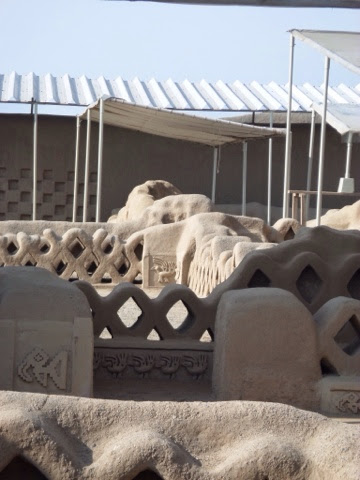 View of Chan Chan excavations, the patterns in the walls here are thought to represent fishing nets. 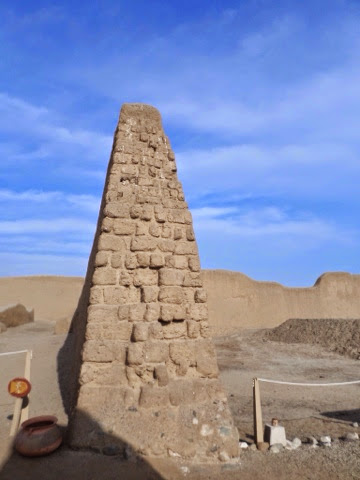 The walls are trapezoidal in shape with shallow stone and mortar foundations, the stone blocks decrease in size as you go up the wall, apparently this was to protect against earthquakes.

We then headed to the beach for beers, dinner and to chill out prior to getting on the night bus to Lima. It was a very nice spot, with very large beers. We sat and watched the sunset, then had a huge mixed grill from an outdoor BBQ, awesome. 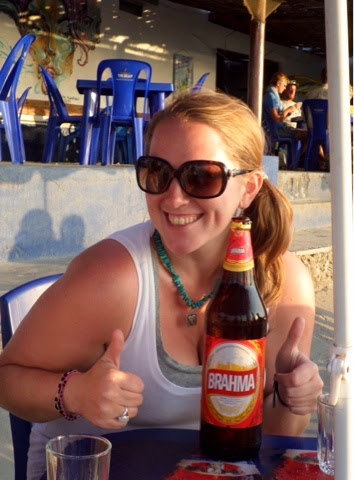 How to cope with overnight buses…. 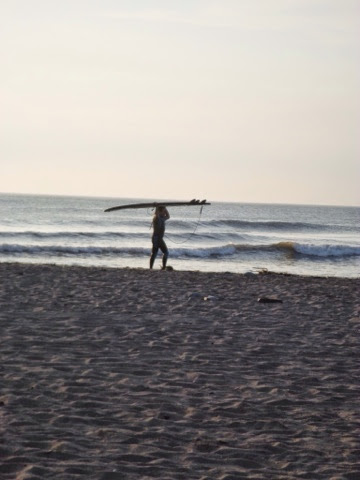 Apparently a good spot for surfing, but there were no waves when we were there. 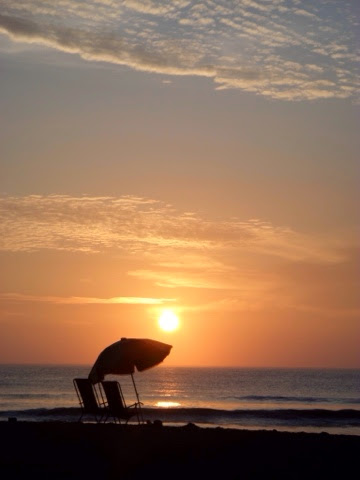 Sunset over the pacific 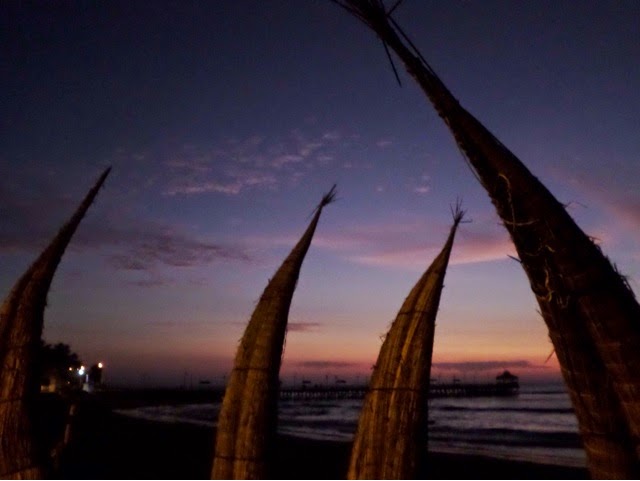