Arequipa, doppelgänger of Cuenca and where the earth moves…

Posted on Apr 6, 2014 by Robyn0312
Our time in Arequipa started with a walking tour of the town, we went round another amazing market. The fruit selection is insane. I love all the different fruits. 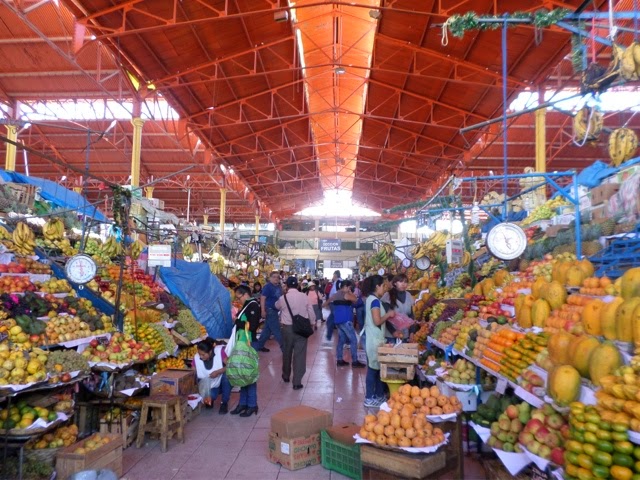 Apparently they have thousands of varieties of potatoes in Peru, it was quite amazing to see them all on the stands, it makes. Coles seem very boring! They also have the most delicious looking roast pork stands and entire aisle of stands devoted to fresh fruit juices! Heaven! 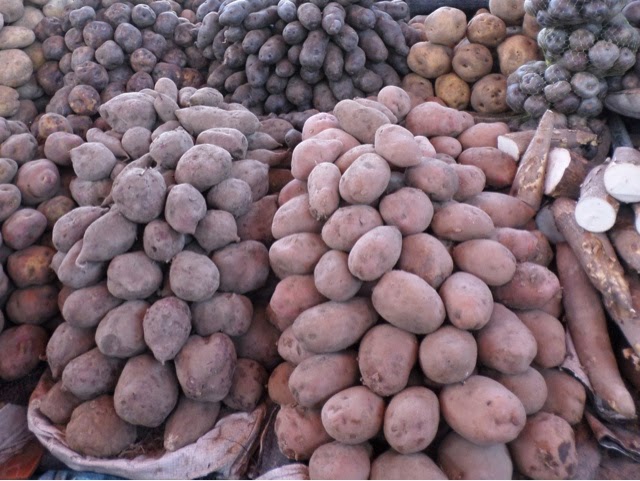 Arequipa is the second largest city in Peru with a population of over 800k people and sites at around 2300m elevation. It’s a colonial town and has lots of beautiful buildings and many churches, some of which are in the ‘Andean Baroque’ style, as shown below. They took the style and incorporated located animals and plants, I think it looks pretty funky!
Arequipa was technically founded by the Spanish in 1540, but it has a far longer history. Apparently when the Incas were travelling through the area they recognised the nice climate and fertile soils and so established a town and the name Arequipa is apparently Incan for ‘stay here’.
The town is also nicknamed ‘the white city’. This is actually due to two reasons. Firstly the town was mainly a Spanish town and therefore had a large white population. The majority of the buildings are also built from a white volcanic tuff. 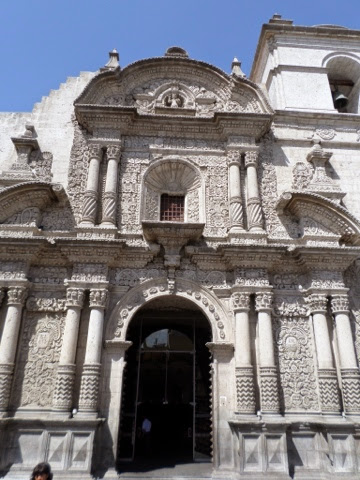 Arequipa is surrounded by volcanoes and we actually got to see them hurrah (despite the recent eruption I’m still not convinced there’s any volcanoes in Ecuador 🙂 ).
The town is located at the base of a perfectly shaped stratovolcano that is named El Misti, which translates to meaner ‘the owner’. El Misti is dormant and essentially if it went off the town would probably be complete toast.
There are also two other volcanoes, one to either side of El Misti. the first Chanchani means ‘dressed in white’ as it is always snow-capped. The other one Pikchu Pikchu means ‘pyramid pyramid’ in Quechan.
All three volcanoes are over 5000m in elevation and were beautifully snow-capped. 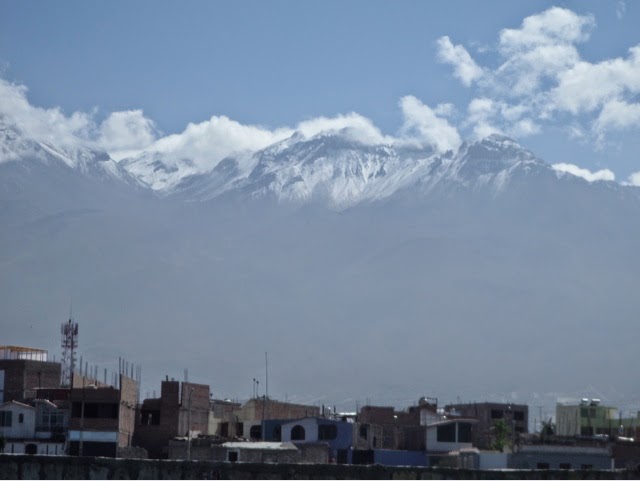 We then went on a tour of the city’s convent, although they call it a nunnery here, the Monasterio de Santa Catalina. It is easily one of use most beautiful places I have visited and I went a bit mad with the camera. It was also such a peaceful environment despite being in the middle of the city, I really enjoyed the tour. It was founded in 1529 back when it was traditional for the second son or daughter to enter service. This convent only accepted high born women though. Women, or girls, entered as novices from the age of 12 onwards and had to pay an admission fee equivalent to $20k and also provide a trousseau. The convent was therefore very rich and import to the town.
The nuns started by serving four years as a novice before taking their vows. They had very little interaction with people from the outside but ran a bakery a school and an orphanage.
The convent is still active, although you are not allowed to join until 18 now. Currently the youngest nun is 25 and the oldest is 96, they are now even allowed luxuries such as TV, although they still pray for 7 hours per day.
Originally they were not allowed to smile, laugh or run as these were all considered signs of vanity! Imagine that at 12 years old!
Originally the nuns lived in small separated houses. The complex is so large it’s actually considered a separate town within the town of Arequipa and has its own streets. The nuns had separate bedrooms, dining rooms and kitchens. They actually had servants which were lower born poor nuns who had taken orders due to poverty and the relative good quality of life it offered to them. From the mid-1800s this was abolished and communal living was introduced.
The walls are all painted terracotta and blue, they have to be reprinted every single year after the rainy season as it’s only a lime wash and you can’t lean on the walls or you get covered in paint! 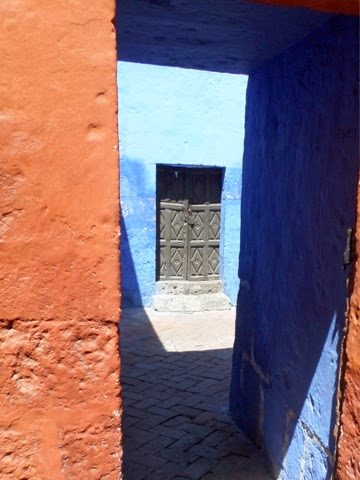 I was spoilt for choice for doors and windows…. This is actually the toilets! 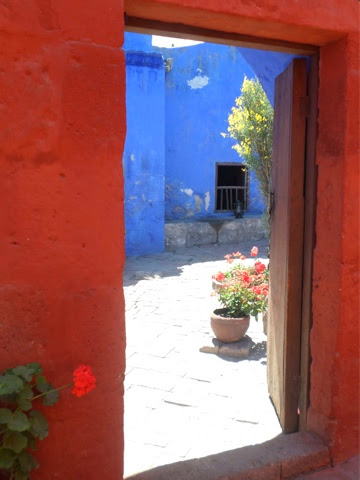 The courtyard of one of the larger ‘houses’ 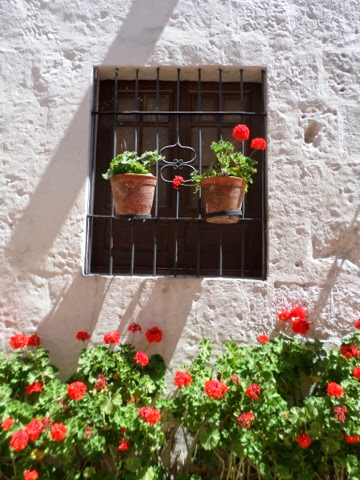 I love the contrast of these beautiful red flowers against the white walls. They were planted along the entire street. 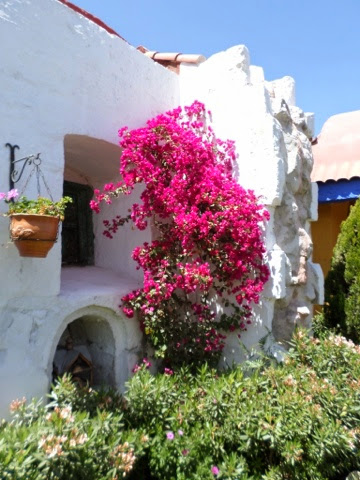 The convent didn’t have power until 1969 and until this time the laundry was done in large wine pots which have been sliced into two sections. You fill them by plugging the hole in the bottom with a carrot and then use water diverted from the irrigation channel down the centre. They look lovely all lined up and I reckon it would make laundry more fun, all out in the sunshine washing in giant pots! Not that I’m volunteering! 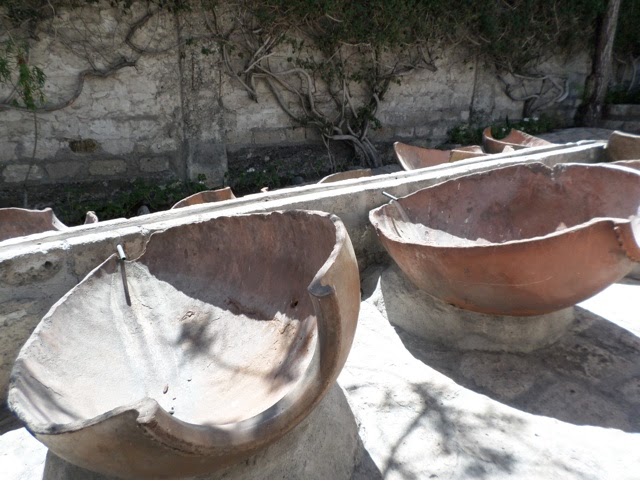 Holger took us for lunch at a local restaurant and it was crazy good! It was a total feast though and we all felt pretty sick by the end as the portions were enormous. I had a ‘Triple’ which consisting of roasted pork belly, potato bake, stuffed capsicum (very spicy) and lambs foot salad. Oh my god it was so good! Although I don’t think I will need another meal for about a month! 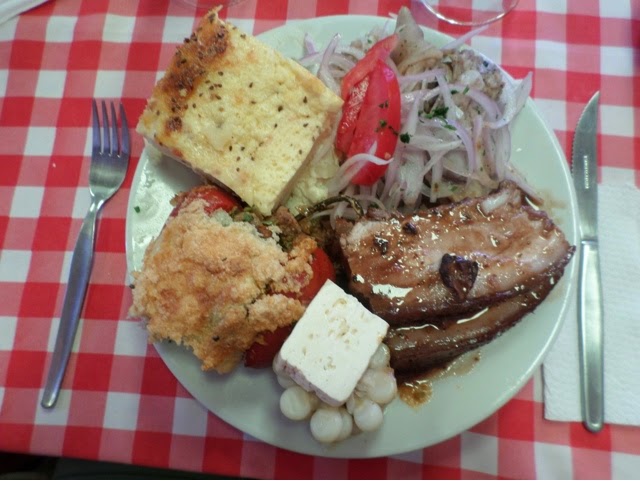 Some of the group ordered guinea pigs… I had pet guinea pigs and although tempted to try for the sake of it, I just wasn’t in the mood for it just then… Although who can’t resist such a tasty looking plate of food! 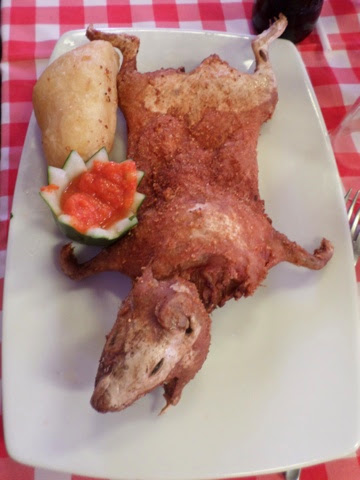 We finished dinner with queso halida, or cheese ice cream, although it has no cheese in it. It was delicious and super cheap from a lady with a little corner stand. I felt very greedy and will definitely need my ass kicking back into shape when I get back home, big time!
Tomorrow we head off for an adventure at Colca Canyon… Hoping for some spectacular scenery, bring it on Peru, I am definitely warming to you! Arequipa has a very similar feel to it to Cuenca, although Cuenca is still ever so slightly ahead… I am also very excited to go and see lots of llamas :-).
Whilst we were on the way to Arequipa Chile was hit by a large 8.3 magnitude earthquake and although we didn’t feel it we did see some crazy waves as we were driving along the coast.
The last night we stayed in Arequipa we felt the 7.2 magnitude aftershock. It was quite cool, but a bit disconcerting. We were sat in bed and I had my headphones on, at first I thought a person in the next room was just being very loud, until I realised that my bed and the windows and doors were shaking. It went on for the best part of two minutes!