We left Cuzco and caught a bus to Puno, the main town on the Peruvian side of lake Titicaca

Puno is known as the folkloric capital of Peru and is also home to the second largest carnival in South America. Apparently up to 40,000 dancers and 20,000 musicians alone are part of the carnival and during that weekend the town consumes the same quantity of beer and the entire country of Peru does in the rest of the year! 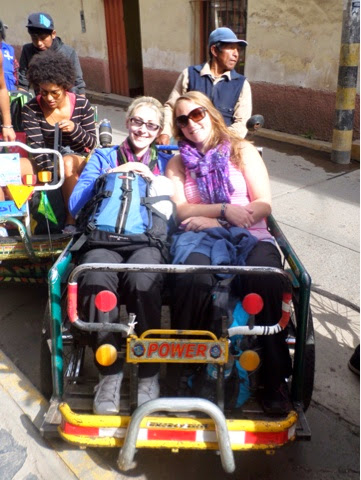 We got cyclo taxis down to the port to get our boat onto the lake and it turned into something out of wacky races, one of the cyclos almost got written off! The guys must be super fit though!
We came to Puno as the launching point of our visit to Lake Titicaca, which is the highest navigable lake in the world at 3820m. At first it was a fairly grey dull day and the lake looked quite unimpressive and my initial reaction was of being very underwhelmed, but I am glad to say that it just kept improving as the trip went on!
Lake Titicaca was primarily a fishing lake, with lots of native species. However, with the introduction of invasive species such as trout the numbers have seriously dropped. This has also all but killed off a once productive fishing industry leaving the residents of the lake solely reliant on tourism. I was also disturbed to hear that the lake is home to toads up to 60cm in width… Ewwww!
We got a small boat out to visit the floating islands of Uros. About 3500 people live on the floating islands and the people were driven here escaping rival tribes and also the Spanish. 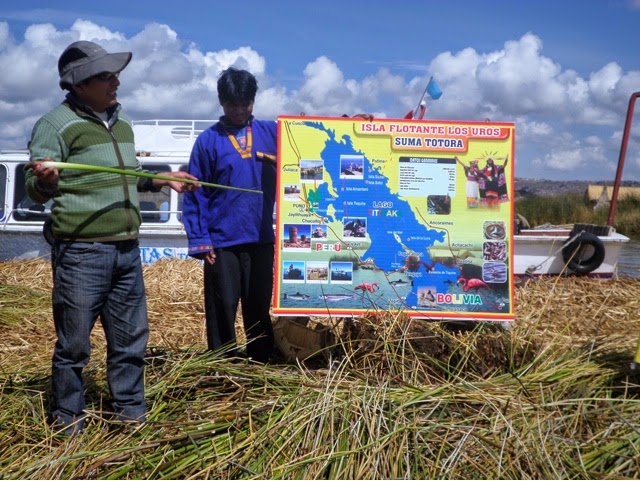 Our guide Alex/John depending on when you asked him showing us a map of the lake aboard one of the floating islands.
Originally the people lived on their boats, which are made of long totora reeds and look a bit like gondolas. Sometimes they join two boats together and add small huts or platforms on them. We had a bit of a novelty ride on one and it was nice and peaceful, but I cannot imagine having to house an entire family on one! 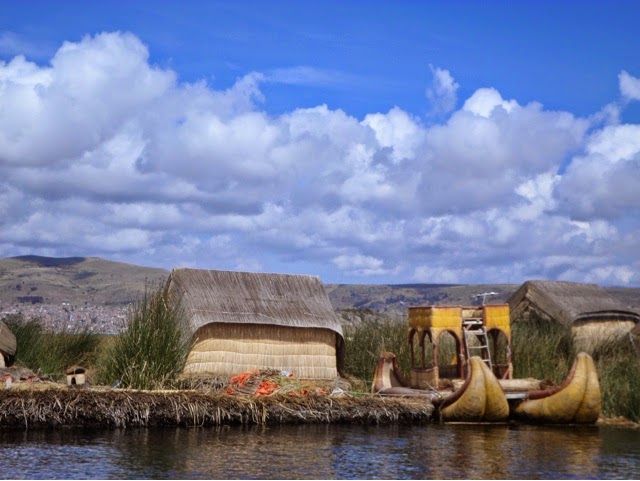 The floating islands are constructed from floating reed mats, they’re huge and can have several houses or small communities on them. The base of the island is about 3m in vertical thickness, which is made up of 1m of of soil/reed blocks. These are staked and then tied together using ropes. The upper 2m are layered reeds which are replaced 1-2 times a month depending on the wet-dry season.
The islands are then anchored in place to stop them floating away!
The way of life is quite mobile as it’s possible to just up and float your island off to a new patch. You can also split off sections of your island by sawing through it. Apparently it’s quite common for people to desperate islands in disputes, or to cut a section off to go and stay with a different family member on their island for a few months… You just turn up and join your bit to theirs… Although it would also be fairly easy for someone to cut you off if they didn’t want you there… Sometimes when there are ‘turf’ or rather ‘reed’ wars people will cut off the anchorage of islands so they float away. 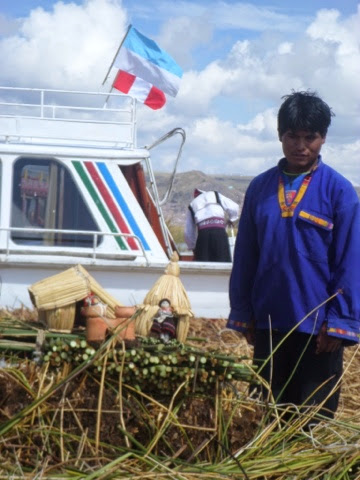 Model of the construction of the reed mats.

The people keep their livestock on a separate island so as not to pollute their own with mess. Apparently as they rely on the lake water for cooking and drinking their toilet facilities are a twenty minute row boat ride away… But I’m not too sure I believe this. 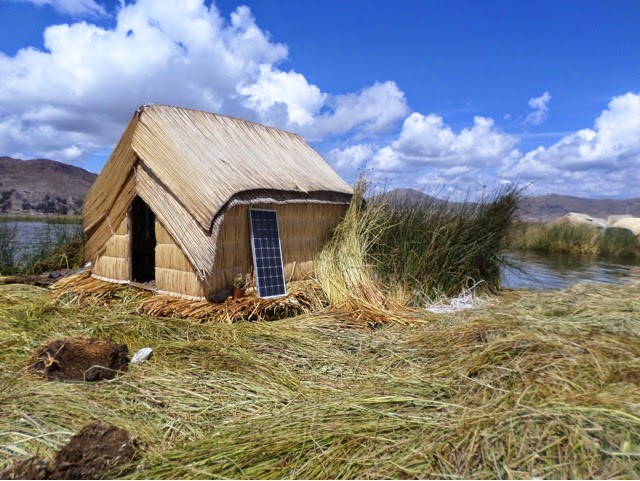 We were shown the houses by the couples who lived on the island we stopped at. They are pretty huts made up of reeds. Funnily though they all have solar panels and TVs inside. 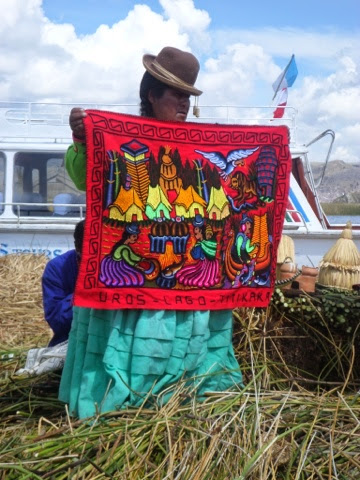 The local women make most of their income through the sale of handicrafts, such as the wall hanging above. It’s a shame not to be able to buy more to support them when you’re travelling for a long time with limited space. Some members of the group who leave the tour in La Paz did have a bit of a splurge though.

We then got back into the boat for almost two hours to a peninsula called Llachon, this is where we did our home stay with the local community. All the women of the community came out to meet us as we arrived at the dock, with was really sweet how they all hugged us and seemed genuinely happy for us to be visiting. I assume most of the men are away working as we didn’t see them the entire time we were there.
We were assigned 2-4 to each house, Courtney and I stayed with Vivienne, or Bibi. 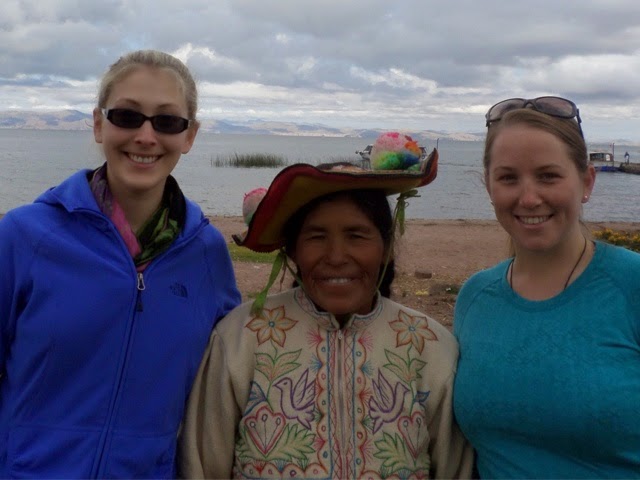 Me and Courtney with Vivienne our Quechan mama for the night.

Her house was up on the hill and there were nice views back across the water. She has three small mud brick houses with lovely flower beds across the fronts. They have electricity and an outhouse toilet, which was very welcome. Courtney and I shared one of the little houses, it was so cute! We had lots of thick blankets on our beds too so it was nice and warm. 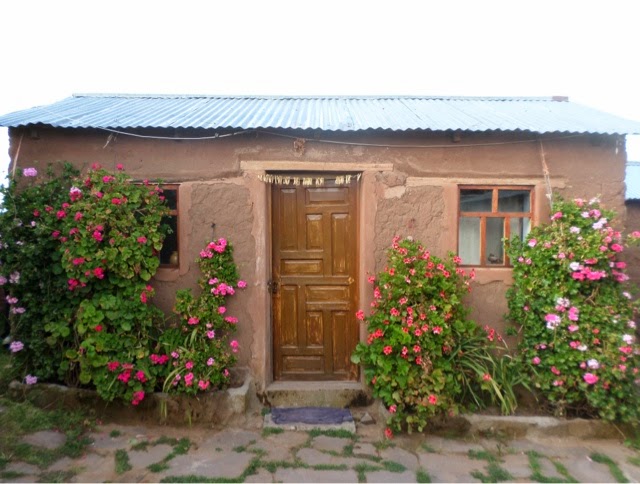 Our little home for the night.
Bibi has two sons, aged right and twelve, although they are both apparently away attending elementary school in Puno.
After a lovely lunch of barley soup followed by fish and vegetables we headed out to help Bibi sort potatoes. A lot of the potatoes are pretty many and had been attacked by bugs, we basically sorted a huge pile into edible ones and ones for the animals. Afterwards we went to collect some cows which she tied up next to her house. One of them had a tiny calf and it was really cute.
That evening we played locals vs. visitors volleyball. Initially we thought we were in with a good chance as they are all so tiny, but this proved extremely arrogant as they totally smashed us. The older women sat the side keeping score using rocks whilst the younger women kicked our asses repeatedly, much to Holger’s frustration. He is very competitive! 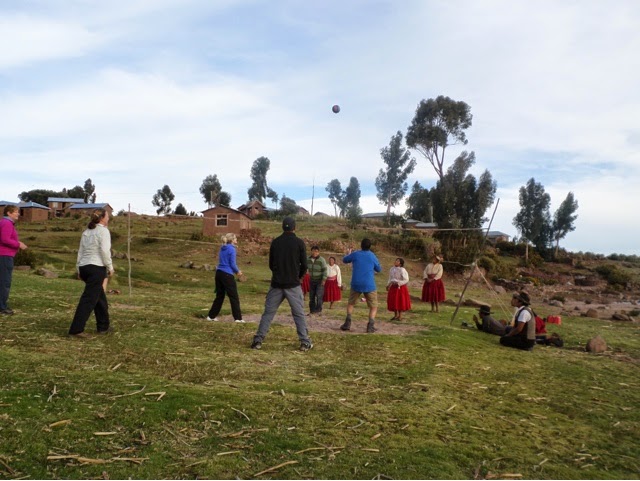 Losing, not so stylishly….
We then returned home and were dressed up in the local costume. The men wore ponchos and hats, although apparently red and link ponchos are usually only worn to weddings or special celebrations.
Us girls were dressed up in the full pleated skirts, embroidered blouses and hats. Although we were wearing our full cold weather gear underneath too so we didn’t freeze.
You have to wear a different hat depending on your marriage status. Married women wear back embroidered bats with two colourful pom-poms on top. They also wear black jackets over their shirts. Importantly the men actually are responsible for making the hats and jackets and it’s a sign of status and the quality of your husband as to how good a job he makes of your hat and jacket! The single girls wear knitting hats which are very long and highly patterned, a bit like Christmas stockings! They are very frilled all around the face, apparently to make you lol like a fuchsia! They’re quite heavy and difficult to keep on your head. The knitting is very fine and must be done on tiny needles. Was amazing and I think we all looked great. 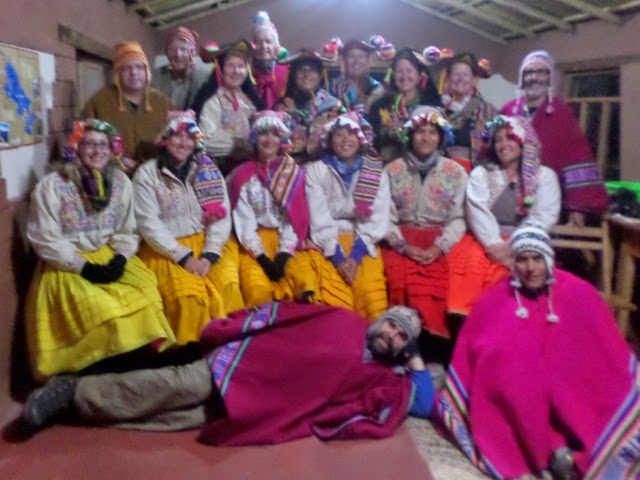 What a sexy bunch…

We all helped to prepare dinner, shelling green brands and peeling potatoes.
We had vegetable soup followed by rice and vegetables fried in egg. It was very tasty.
Our guide them told us all about the local wedding traditions which sound very complicated.
Apparently a local wedding takes three days. The first two days are spent feasting and dancing. On the third day the chefs go on strike and the couple and their family have to prepare a big feast which is then divided up between the in-laws.
Holger also tried out some amazing chat up lines on Courtney…
First he took her unawares by asking if she would out her little finger in his coffee… We were all rather bemused. He followed this up when she asked why (other than thinking he was weird) by explaining that it was because “I like bit of something sweet” oh yuk! So he got told off a bit ha ha.
He then proceeded to follow this up by asking to check her tag in her top… To check if it was true that she was made in heaven. For Real!
The next morning after a lovely breakfast of eggs and quinoa bread we said goodbye and headed back to our boat. It was a lovely day and were all sad to leave.
We headed off to the Isla Tequile, which happens to be the island that our guides wife is actually from. 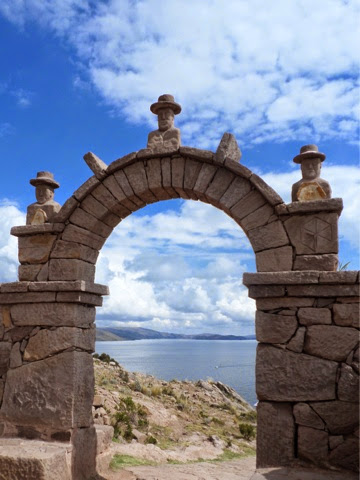 The locals all still wear traditional dress. The men wear red and white hats if their single and change to all red when they marry. The women all have their hair in the usual braids which are tied together with coloured pom poms when single and black or brown tassels.

The weddings here apparently last seven days, of which the bride and groom have to spend three days and nights sat on their knees! Fun!
We walked across the island, along a small coastal path and there were great views across the lake. You could see the mountains over in Bolivia with their snow caps, although unfortunately they don’t show up very well on my pictures. 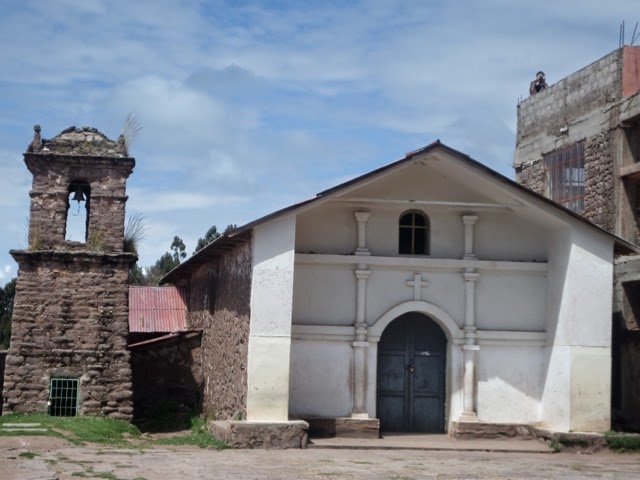 The hillsides are all terraced and they mainly grow potatoes and quinoa here.
We walked to the main plaza, a small town square. Here we could visit the famous male knitters. Although there was a warehouse selling their goods apparently they usually don’t sell to the public as their high quality knitted products are for ceremonial and personal purposes. They just had all the usual types of hats etc. on sale so it was a bit disappointing not to see anything else or different.
In the afternoon we continued our walk along the coastal path to a spot with great views across the lie which was nice glittering bright blue.
After a local lunch of fish, served on amazing fish shaped plates, with a panoramic view across the lake, we headed back to the boat… Via 500 steps. 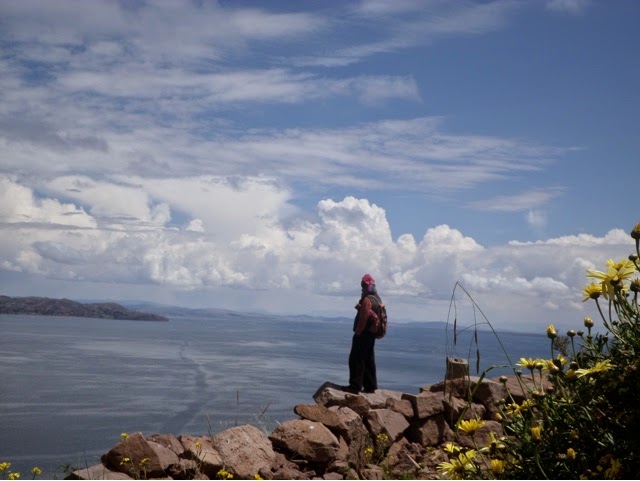 Local man looking across the lake back towards Puno.
After getting the boat back to Puno we headed to a Peruvian dinner dance show. I had some really tasty alpaca and a blue margarita 🙂
I also got to see my Quarry Trail trek group again, which was really nice.
The show included lots of different dance routines with amazing costumes and a lot of pan pipe playing. 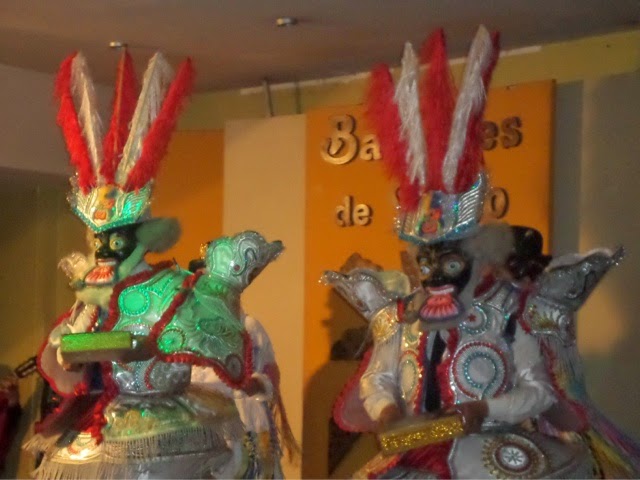 The following day we were leaving Peru! It’s actually really sad as I have come to really love this country. We are then heading to La Paz… Bolivia here we come!