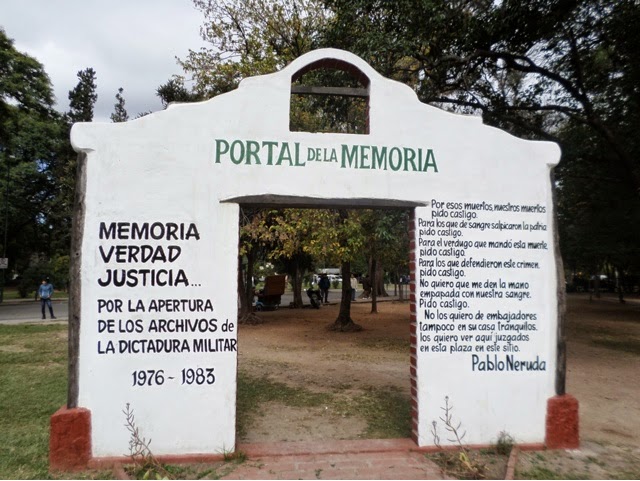 The war memorial, showing a poem written by Pablo Neruda.
The town has a cable car which takes people up to a viewpoint across the city, the only way to avoid the 1070 steps up Cerro San Bernardo. Unfortunately it’s closed for the holiday weekend so we won’t be able to take it, we will see if I can be bothered to do the walk!
From there I visited the main square, Plaza 9 Julio, the teachers strike was centred there, so it was full of tents. As usual all the important buildings and the city’s cathedral is located there, its pink! 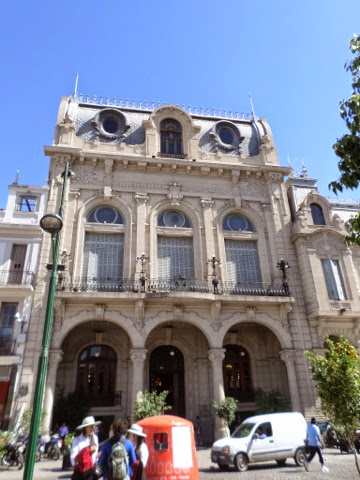 Fancy looking hotel… Not quite where I’m staying! 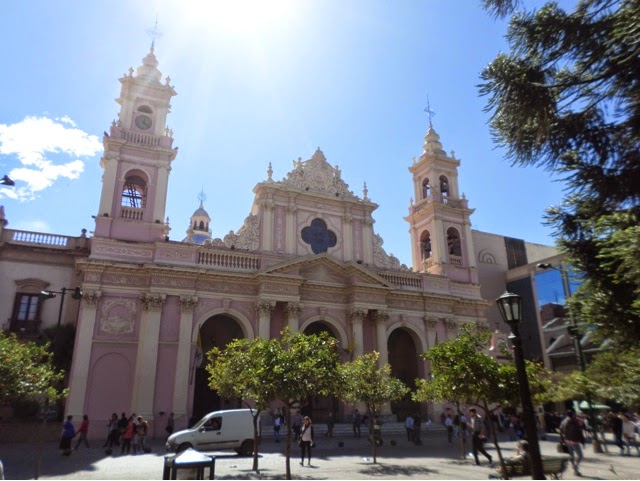 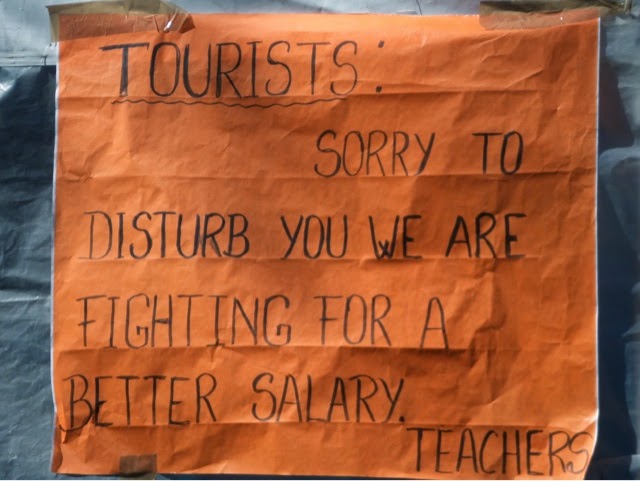 Very polite and underpaid teachers!
After wandering through the town the group headed to the Patio de Empanadas, where the best empanadas in the city are sold. I had several different types, all yummy. As they’re quite small it allows you to try lots of different flavours. I had grilled chicken, grilled beef, corn and a fried cheese one.
After lunch I walked out to an artisans market. It was located so far out of the centre of the town and in a residential area that I questioned whether it was really there, but eventually got there! It was a really nice market with artisans stalls all located in an old converted hacienda. Actually bought something too, a pair of thongs.
In town I was also able to pick up some knitting needles from a haberdashery. Although it was quite fun trying to explain what I wanted to the shop keeper :-). I can now make something with the wool I picked up in Peru… I’m thinking warm socks!
On the way back to the hotel I visited the main cathedral and the two churches of the town. The Iglesia San Francisco is currently being renovated so is only open for tours and the outside is all covered. 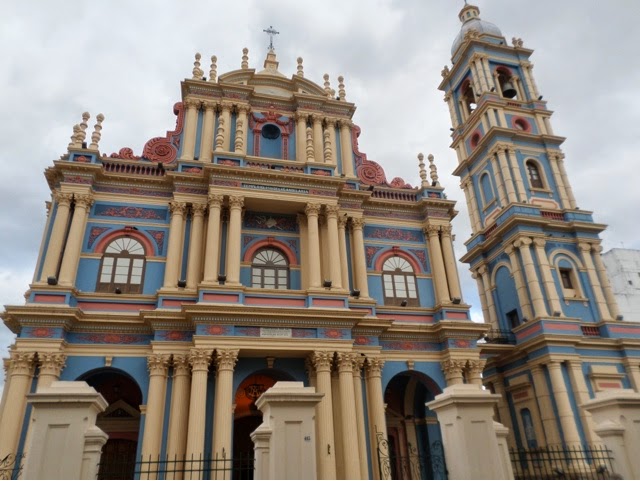 Iglesia Nuestra Señora de la Candelaria (La Viña) is a beautifully painted church. Although in some ways the blue colour of the building is a shame as it masks the blue roof tiling, which reminded be a bit of the cathedral in Cuenca. Inside it is a relatively simple church, but has some nice paintings.

It turned out that I had walked for over eight hours by the time I got back to the hostel and I was glad that in the evening we were just having a BBQ dinner at the hotel. The hotel is actually a converted family home and so it is actually a lovely place to stay. It was so nice to have dimmer round a big table, just with the group and not out in a restaurant. It was great to be able to sit and chill out on a sofa for a while without it having to be in a bar or somewhere noisy.
Unfortunately I wasn’t feeling very well the next day. I went for a walk with a few of the girls to see if we could catch the gondola up the mountain. Everything was totally shut down as it was a public holiday called Workers Day. I ended up having a bit of a sofa day, mooching and catching up on some admin and researching exciting new plans….
It was a bit of a shame that we had the public holiday weekend here as I don’t feel that I got a true feeling for the town, or really the chance to get to know it. Also my itinerary changed to stay and extra day in San Pedro, which I am very glad of as I loved it there, but it take mean I lost a day here.
After a lunch of leftover BBQ we headed off to catch the bus to Mendoza. I have been really looking forward to visiting Mendoza, home of one of my favourite varieties of wine, Malbec. We also paid for an upgrade to a fancy bus, so hopefully the eighteen hours, yes eighteen, go by quickly! I have three nights in Mendoza, I wonder how many Malbec’s I can fit in :-)… Challenge accepted!